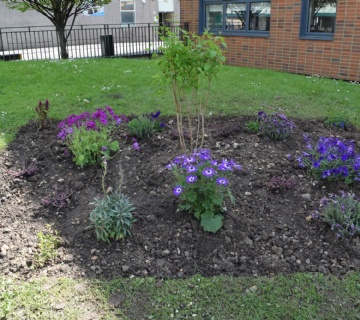 News of Mrs Lloyd’s death in January was received with great sadness by the college community but it is a testimony to the strength of relationships which brought Henry Cort together.

The love and care expressed for Mrs Lloyd’s family and the college was indeed humbling and we will be forever grateful to staff, students, families and friends for the way they have supported each other at such a difficult time.

Students have created a purple memorial border, in Mrs Lloyd’s memory outside where she worked.  We have raised £1,053 for Myositis UK and smashed our £1000 Just Giving target.

In addition Dr Lansley will be participating in the Race to the Stones of 100km on 14-15 July following the Ridgeway footpath finishing at Avebury Stone Circle to raise money for #UKMyositis in memory of Mrs Lloyd. To support her please donate to our Just Giving page: https://www.justgiving.com/…/the-henry-cort-community-colle…

We will be releasing balloons in memory of Mrs Lloyd at 6:45pm during the Class of 2018 Prom.  Please rest assured that the balloons being released are 100% biodegradable. We are following the rules precisely and will have nothing attached to the balloons and we will be in contact with the airport before and immediately after the release!