Back to school for Senior Citizens to celebrate Christmas 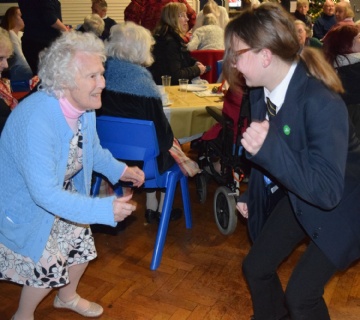 On Tuesday 12 December about 65 senior citizens, with their carers, packed out the Cort Theatre for this year’s knees-up.

It was back to school for senior citizens as they celebrated Christmas with a party hosted by The Henry Cort Community College.  The annual event has been held at the college, in Hillson Drive, Fareham, since 1988.  On Tuesday 12 December about 65 senior citizens, with their carers, packed out the Cort Theatre for this year’s knees-up.

They were treated to an afternoon of entertainment put on by students from all years. Among the students serving the guests were siblings Daniel and Rebecca Vartan, Daniel, 14, said: “It is good because some of the older people do not get to come out a lot.  There was one woman who was 102 years old and she celebrated her 100th birthday with us two years ago.  It was really nice to see her back.”  Rebecca, 12, added: “It is nice for all the people to come in to school and enjoy Christmas with us; I particularly enjoyed watching one of them dancing with my friend.”

Students prepared and served sandwiches, cheese and biscuits, followed by mince pies.  The college were grateful to the Southern Co-op in Oak Road for providing food donations which helped make this a truly community event.  Some of the younger students waited on tables and they said: “The senior citizens have been very pleased.  Some older people do not have many people to talk to and it is nice to talk to them and make them feel nice inside.”

There were a variety of acts from this year’s Henry’s Got Talent including singing, piano recitals and dancing with all guests receiving a gift.

Residents from sheltered accommodation and care homes across Fareham came to the event, including Collingwood Court, Hunter’s Lodge, Merry Hall, The Fernes, Blackbrook House and clients from the Kershaw Day Care Centre. The college is looking forward to preparing the 30th anniversary celebration next Christmas.

Principal Claudia Cubbage, praised the event, which has been organised by the college for 29 years and said: “This puts back something into the community.  The students love it and it bridges the gap between the older and younger generations”.